Photo: M. Gallian
My girl had a real opportunity. Through sort of luck of the draw, her AYSO Girl's Under 8 team was selected to play a soccer game on the LA Galaxy field. The real deal. She hath trod where David Beckham not fifteen minutes earlier hath trod. For a full two halves, right after the game against Dallas on Sunday. She was tickled pink (and her brother green with envy).

But here's the thing: The other team selected at random was an Under 8 Boy's team.

As much as we might not have wanted this to become one, this was, at some level a Battle of the Sexes.

Is it nature or nurture? Something of both, I suppose. Nonetheless, boys compared to girls, generally, are stronger and faster. There is some research to support the notion that boys are more aggressive, as the pleasure centers in the brain will light up when taking risks. Which is just the way things are. And after all this time, these facts are still the kernel of plot, the dramatic arc, and the punch line in popular culture, because it is just so extraordinary, should a girl better a boy in an athletic undertaking. My fear was that my girl's team would get crushed. Just hammered. And not on some school ground soccer field, but at the Home Depot Stadium. In front of lots of spectators. Could I rely on the other team's coach to go easy if the game proved lopsided? And if, would the boys then listen? This is the LA Galaxy field. Who at 7 years old wouldn't want to win a game on this field? And win by a lot?

So what happened was this: The boys' team ticked off three goals pretty quickly. Most of the girls' were still pretty happy to be playing--goals shmoals--but two or three our girls were feeling a bit overwhelmed. The field the kids were playing on was sort of an ill-defined area on half of the Home Depot Center field. This area was much, much wider than any U8 field. In fact, this playing area was wider than it was deep, goal to goal. So what our girls' coaches did at this time was to stand along an approximate sideline, and if the ball were to journey too far beyond this imaginary line, they would chip it high back into the playing area. And this had the effect of taking possession away from the boys' team. So technically, the girls' coaches were interfering in the play of the game. I get that.

But, boys' parents, did you have to boo?

And did you have to hiss?

And did you have to yell things like "Push her!" and "Kick him (the coach) in the shin!"? You must have seen me with my camcorder. It's a pretty good camcorder: I have it all the audio recorded. For all the respect I pay to the FIFA laws, isn't there some code of decency that says you never, ever boo for any reason ever around 7-year-olds playing soccer? Maybe, just maybe, one of those kids thought you were booing him or her. Think about it.

And here's the other thing: It was the boys' mothers booing and hissing. Not that I expected some sort of gender solidarity, exactly, but perhaps a bit of quiet sympathy for the situation? Maybe, just maybe, a goal is not the only goal for which to strive here.

There were flaws in the situation. Maybe the field should have been better defined. Maybe two teams of the same gender should have been playing. Maybe emotions were running a little high because of the excitement and it was warm that afternoon. There is a lot we could pin on a flawed situation. But still, still I don't see any reason to boo. None whatsoever. Your team won, even.

What will the girls take away from this game? Frankly, the girls played pretty well. They were nervous and some basic soccer principles escaped them. There was quite a bit of bunch ball. But Kaitlyn got in a break-away goal. And Samantha scored a goal right past three pairs of opposing team legs. And, Anna, for one, was excited beginning to end. She is not much of a player, but she was in there. She still refuses to take off the coveted yellow wrist band, which says "Play on field", allowing her to skip past security and right onto the field. And skip she did!
Posted by Fledgling at 5:32 PM 4 comments: 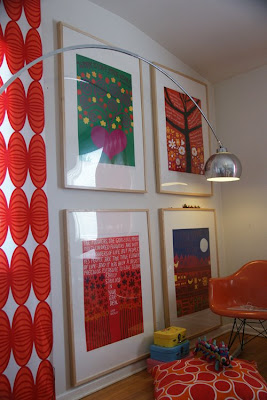 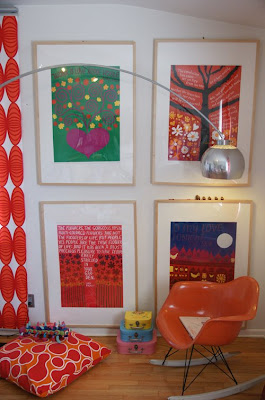 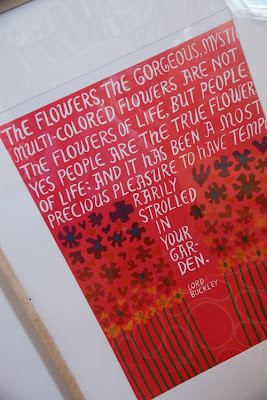 Minilogue - Animals from ljudbilden on Vimeo. 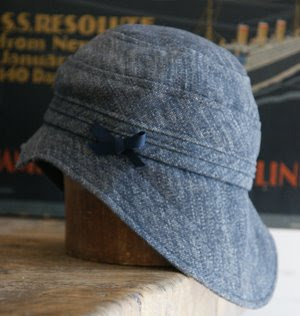 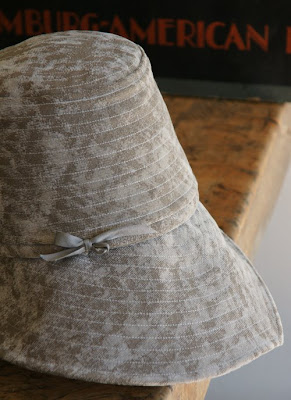 Make! Of course. But Buy is good, too. Especially when it's this good.
I wear hats. Daily. I don't wear hats to be fabulous. I'd much prefer not to be fabulous. I wear hats, because I live in a very sunny place and I am outside as much as I possibly can be. Hats are practical. I wear them for practicality only. But I won't wear a stupid hat. I refuse to be stupid-looking. Therefore, if my hats must be fabulous, then being fabulous is the cross I must bear.
These hats are fabulous. Some of the best hats I've ever had. For so many reasons. And I have had some fabulous hats. These designs can be worn so many ways, each more fabulous than the other. Have a look at this Etsy store. Possible side effects include admiring glances and too much fabulousness for the less-than-fabulous to tolerate.
Make? Or buy? Selbermachen, natürlich. Wobei Kaufen auch nicht schlecht ist. Vor allem wenn die Sachen so schön sind.
Ich trage Hüte. Täglich. Ich trage Hüte nicht um fabelhaft zu sein. Nein: Ich möchte lieber nicht fabelhaft sein. Ich trage Hüte, weil ich in einer sehr sonnigen Gegend wohne und sooft wie möglich auch draußen bin. Aus rein praktischen Gründen trage frau Hut. Aber doofe Hüte setze ich nicht auf. Nein: Doofaussehend werde ich nicht sein. Von daher, wenn meine Hüte fabelhaft sein müssen, dann fabelhaft sein ist das Kreuz, das ich zu tragen habe.
Diese Hüte sind fabelhaft. Einige der besten, die ich jemals gehabt habe. Und ich habe sehr schöne gehabt. Diese Designs können auf sovielen verschiedenen Arten getragen werden, jedesmal anders und jedesmal noch fabelhafter. Hier das Etsy-Shop. Mögliche Nebenwirkungen sind neidische Blicke und Untoleranz seits der wenigen Fabelhaften. 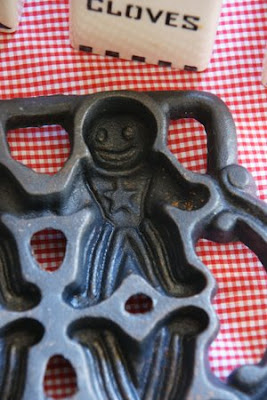 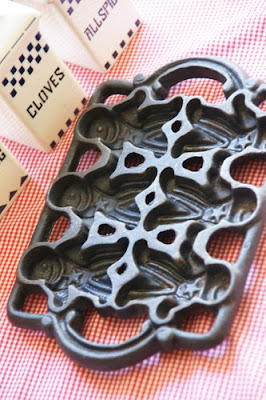 At the local fair 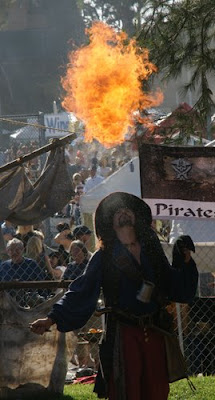 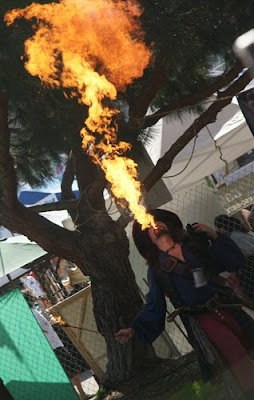 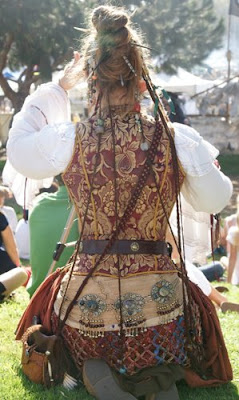 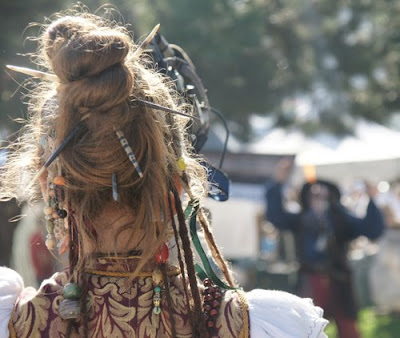 Pirates of the South Bay. Pirates of the Caribbean stand-ins and extras find work between Disney movies (and pillaging unprotected ports, I suppose) at local fairs. Not the real Johnny Depp, but good enough to stand in for him.

'Twere no hornswaggle: In truest Jack Sparrow form, this Jack Sparrow staggers/swaggers over to the baseball pitching cage, shakes aside a few dread locks and lets loose three fast balls, the fastest clocking at 98 mph. 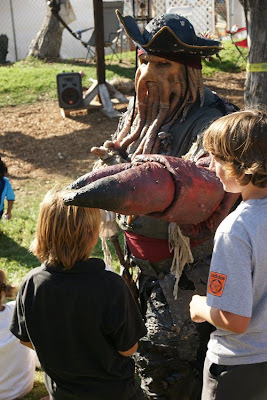 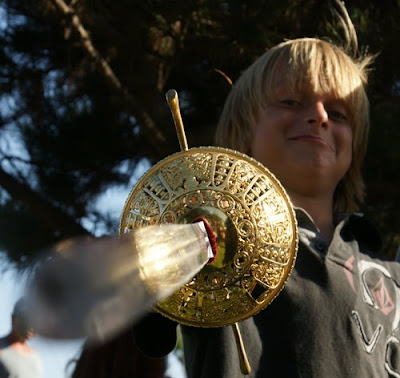 A boy and his foil. A scourge of the seven seas. 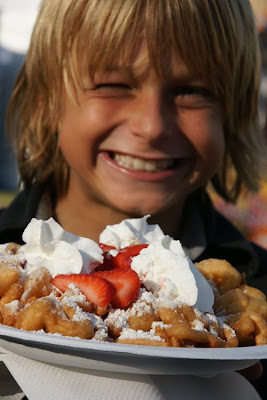 A boy and his funnel cake. (Can it get any better (or worse) than fried dough, powdered sugar and whipped cream?) 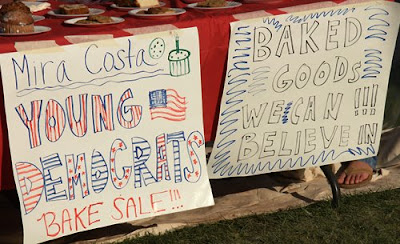 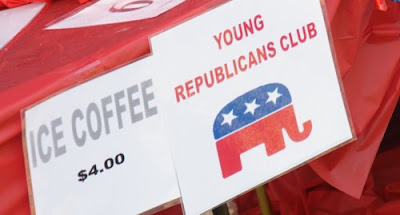 And, on the election front, the Democratic Party gives us something to believe in, while the Republicans have a stimulus package. While not completely being able to forecast what the long-term effects of either might be, today, I think a little bit of both would be good for America. Well, if not America, maybe for me. Mmmm...
Posted by Fledgling at 7:38 PM 2 comments: