Well, my Web hosting service moved my site to another server...

...and something got lost along the way.

I'll be clicking and typing and performing other mysterious feats of Internet magic and hopefully, I'll be able to make the online wholesale shop *voilá!* reappear.

I'll keep you posted, hopefully with a big TA-DA! Please contact me via email if you need anything. I'm sorry for the inconvenience.

My "studiotantrum.com/shop/" site "disappeared". And I'm not able to log on the back end...

I don't know what happened. I hope to be up and running again soon. In the meantime, please email me with any questions or concerns.

Sorry for the inconvenience.

Yours scratching her head,
Nancy
Posted by Fledgling at 6:07 PM No comments:

Ah, the smell of See's candy in the air! Must be Valentine's Day soon.
Jack is in middle school ~ the new kid in school ~ and at the age, when he could really use the excuse of Valentine's Day to hand out Valentines to, you know, everybody. But, hey, now Valentine's Day is for real, right? And you know what comes on Monday: Some really cool kids will walk into homeroom clutching dozens of fundraising carnations, each with a card attached. Those kids are so smug. They already know who will get carnations and who will not. They'll call out the recipients' names and, one by one, march the blooms plucked not 48 hours earlier from their South American DDT and methly-bromide laden greenhouses to their blushing recipients. DDT? No matter: Bring on the carcinogens. Just one. Please just one little one for me. As the dozens of carnations become just a hand full, then three, then two, you try to absorb yourself in twisting back the wire poking out of your spiral notebook or pulling the thread on your sleeve or doodling with ballpoint on your jeans leg...anything, anything but those horrid carnations as they are marched down between the desks.  As if middle school weren't tough enough. I know I hated sitting there in homeroom while the flowers were handed out. Oh, yes, my friends (girls), though we each reviled the practice, we partook in an act of solidarity, an unspoken pact, each buying each other a pink "friendship" carnation. The act of purchasing of which, it can be mentioned, was in itself a test of true friendship: (deep breath) "Hi Student Counil Member/Cheerleader/Volleyball Captain who lives just five houses away and who used go go trick-or-treating with me and played Barbies with me and who has at least three classes with me and who copies off my tests all the time, but who still doesn't seem to recognize me (fine with me), please just take this dollar to fundraise for the extremely beneficial cause of cheerleading camp and give me that card to fill out. Okay? Give me the card and that really weird little game you played with your Barbies will remain our little secret, okay? And that thing where you'd walk around with tennis balls in your training bra? My lips are sealed. Take the dollar, give me the card and you can file back into that flock of letterman jackets and feathered hair and Lip Smackers and Reebok aerobics shoes and leg warmers and upturned polo shirt collars I'll go back to my library carroll and world order will be restored. And don't read the card. It's for my friend you don't like, because she beat you up in fifth grade and she, too, knows about the tennis balls."
But nary a red "love" carnation in all the years of middle and high school would find me. And then, the bell would ring and you would walk out into the hall and it seemed like every other girl in the school was a walking Rose Bowl parade float.
Anyway, for Anna, Valentine's is still awesome. It's about love for everybody in your class.
And fifteen? That's not too many. Let's make 15 little carnation-y fabric hair clips for the all girls in your class.
"Roses are red
Violets are blue
We made this pretty hair posie
Just for you!"
Corny? Sure, but we'll go with it. 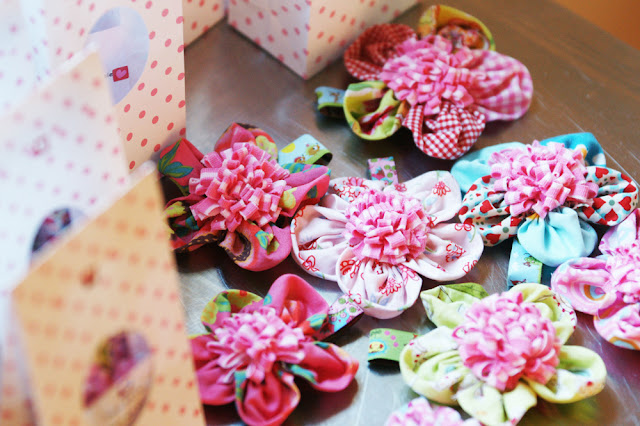 If you are so inclined, the tutorial can be found here. 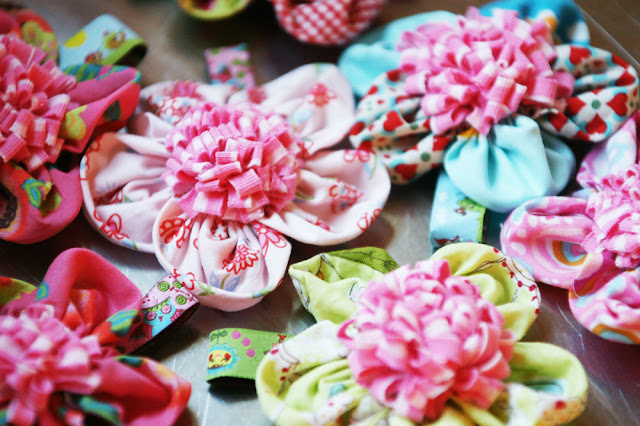 The boys will get Hoppy Valentine's origami frogs. Because they're boys. And after so much assembly line work, I couldn't think of anything original. 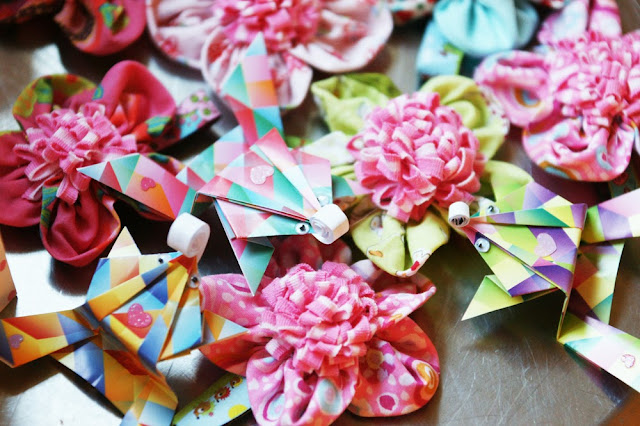 Speaking of See's Candy and speaking of loyal friends and speaking of assembly lines...the See's candy kitchen is where Lucy and Vivian practiced this famous, no, historic bit of television. You know the one. C'mon, watch it again! 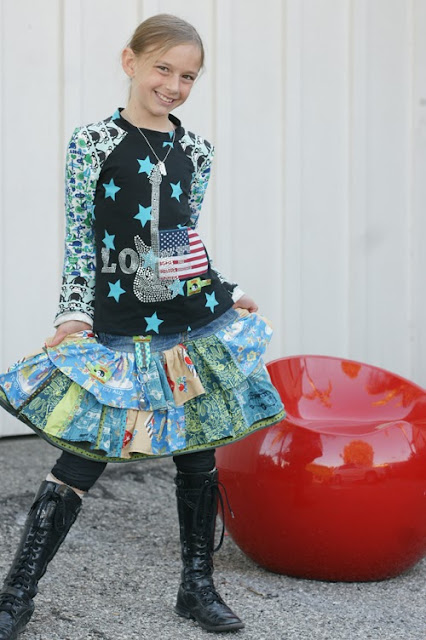 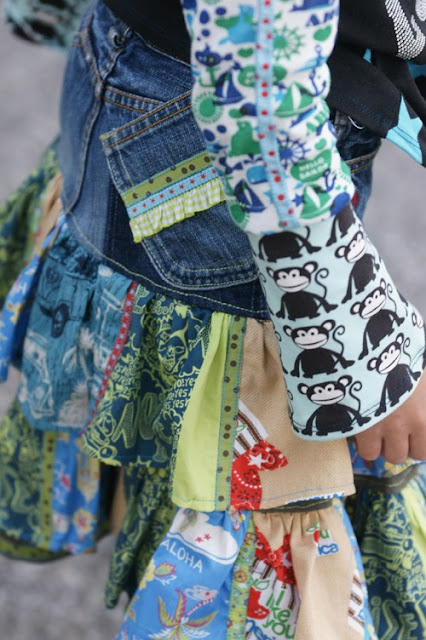 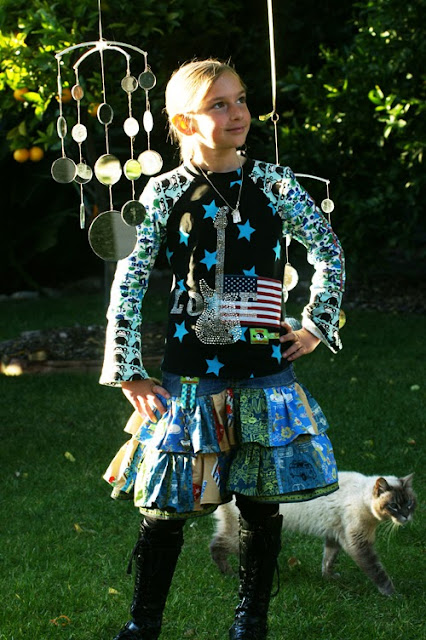 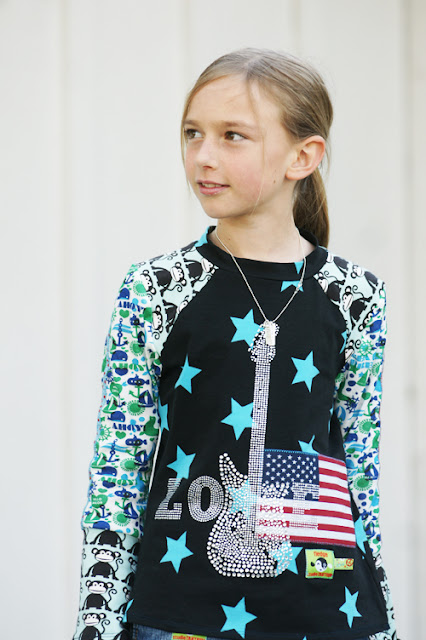 but I like it!
Shirt pattern Antonia from Farbenmix made from some luscious Farbenmix star jersey. The skirt is just a mash up.

In other news...
Recently, I attended the CHA, Craft and Hobby Association trade fair, in town. Did a little make-'n-take and caught up on the latest in fabric stabilizer technology. Compared to last year's show, I saw more sewing supplies makers with stands. This is a good sign, I think.
The people from Creative Publishing International are almost too much fun. 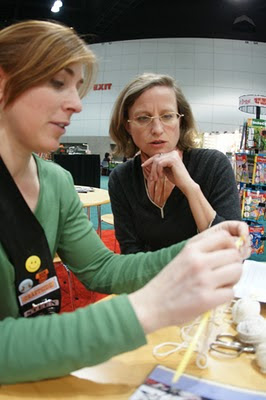 This is Elanor Lynn, author, free-spirit and passionate needle crafter, showing CPi marketing director Catherine Steen a stitch or two. Elanor put knitting needles back in my hand for the first time in two decades. I'm "continental", did you know that? I didn't either. "Continental" not a "thrower". 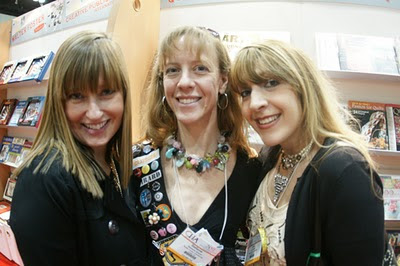 Here, we, from left to right, ... I don't know who that is... she has a crafting television show up in Canada ... Sort of a Canuck Martha? Please tell me who this is. Very nice lady. Anyway, moving along, we then have author and Craftside blogger Stephanie Girard and author and artist Lisa Kettell.
Posted by Fledgling at 5:18 PM 5 comments: