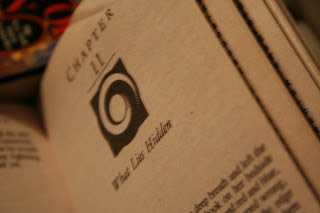 I about figured I'd about dried up my well on ideas--really novel ideas--for children's clothing. I mean, I took that J-shaped bias-cut flounce and made, well, let's see, a skirt, a shirt, two pairs of trousers and a hat with it. Not much left there (socks, anyone?). I took that petal shape and made two variations of a dress and then a jacket. And later I messed with the classic kilt. And this and that. And then the ideas weren't coming. A couple things here and there, but nothing that really said, "never been done before." Most humans are configured around two legs, two arms and a head all stuck on a torso and there are only so many ways to wrap cloth around that arrangement and still ride the bus to school.

Nothing to do but move on and distract myself with some Robert Jordan. Now, if you're not familiar with the Wheel of Time series, and if you skew a little D&D/WoW/Tolkien/Joseph Campbell, if you prefer a movie with a clash of steel rather than a stirring moment of personal epiphany, I'd recommend this series highly. I'd also tell you in equal measure to leave it alone. Here's the deal: It's 11 books. E-lev-en. All in the vein of Tolkien's Lord of the Rings, each about 800 pages long, with hundreds of deeply developed characters, the Light, the Dark, the yin, the yang, plots, sub-plots, sub-sub-plots, sub-sub-sub-plots, twists, turns, twisty turns, turny twists, twisty trysts, trusty horses, tricksey innkeepers, traipsing maidens, tell-all trollops, talking trees, fantastical places, fanatical prophecies, monsters, magic, murders, conniving, contriving, cavorting, conspiring, carousing, arousing, alliances, allegiances, allegory, axes to grind, battle axes, betrayal, blood, buxom bodices, banners, dashing calve muscles, jutting jaw lines, chansons d'amour, dented armor, wounded pride, embroidery (the author spends a lot of time describing embroidery), swords, symbols, assailants, secrets, scars, spears, ceremony, sniffing, huffing, sweating, swearing, glaring ... This all culminating into a final and epic battle between the Dark and the Light. Which is all fine and good.

Except it doesn't: It doesn't culminate.

There's a 12th book and final book in the works, a book in which this final battle and the fate of the world is determined. And not only that, but the fate of that queen and her twins and her mother, who everybody thinks is dead, but isn't, and that last king's lost kingdom and whatever the deal is with that sassy falcon girl and her broken crown, and those killer magic guys and will they ever get along with the snooty magic women, especially that really whack killer magic guy, the one who wants all the power, and those creepy humans brought back to life and that big hairy guy and his book, and the totally gutsy über-magic girl, who was taken prisoner by the nasty other magic witch lady, and let's not forget that fox man and his spooky empress of a wife and that magic collar thing and the main character, who still has to save the world, now with one less hand, and who's really that one queen's (yeah, and he's the father of the twins) brother (who'd have thought?) and has another man's voice in his head and those people who live on ships and those nutty desert dwellers and that one magic lady, who you knew wasn't gone forever, neither her nor that other crazy broad with the hots for our hero ... well, leave it to say, a lot of loose ends can be created in 8000+ pages of 6-point font. Such as it is, the hero that was to take us into this epic battle, the author himself, Mr. Jordan, passed away this past September before he completed the final book in this saga.

Of course, it must be said that the battle between Light and Dark is eternal and never resolved and as such, if the series is never finished, it would be most fitting, appropriate and in and of itself metaphoric for the allegory.

Come on: If I could just know what happens to the falcon girl and her wolf man, and then the gambler dude and the bald empress, I'd be good. I'd have some closure.

Alas, I did not find closure on the whole eternal battle of Good and Evil reading these novels this summer.

Here's the thing, in this series of books there is this parallel dream world. And to get into this world of dreams, the characters need this magic round thingamajig. I looked at the depiction of this round gizmo and thought, "That could be a skirt." I sliced up some fabric in such that way and made a skirt. And it worked. Then I made it a double-layer skirt and it worked even better. See? I have magic powers.

And so you have LAGUNA. Available at Farbenmix.

And maybe I've run out of ideas. And maybe not. I don't know how this story ends.

"There are neither beginnings nor endings to the turning of the Wheel of time.
But it was a beginning."

Posted by Fledgling at 9:20 PM

*ROFL* I laughed so hard about your "That could be a skirt", tears were running down my cheeks *LOL*. That´s so Nancy. I literally could see you saying that *LOL*. By all means, reading that book series was a marvellous idea !!

I'm your relative Ben from Memphis. My grandmother passed along the link to your blog, and when I check it out what do I see? A post on the Wheel of Time. I started reading the series in 1990 when the first book came out, and remained a loyal fan until book seven when I ran out of steam. I loved the world he created but felt that the series was slowing to a glacial pace as time went on.

Regardless, it was cool to check out your blog. Keep in touch!