Boys will be boyz.

And still be boys. 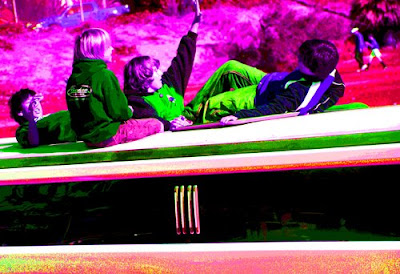 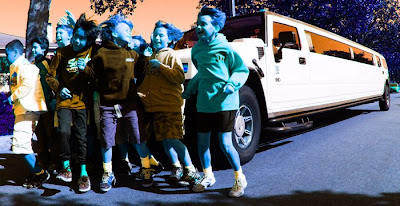 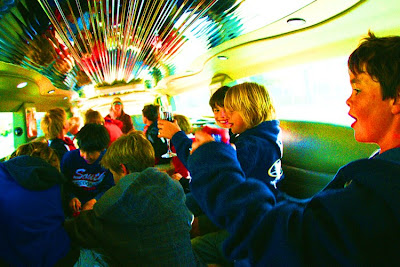 Growing up, I liked boys. Boy, did I like boys. And not just like-like, but I really liked their puppy-dog ways. Shirts untucked and stuffing your whole sandwich in your mouth and table top football and burping contests. No, I never wanted to do those things. Yuck. Boys were yucky. But that unabashed yuckiness was fascinating. And frightening. The nerve. Where did they get the nerve? No, really: Where did they get it? I was extremely shy around boys. Anybody or anything that had the nerve to be that--that--that much like a boy must know a secret that allows them to be that way. I wanted to know the secret.

I am now a mother to a boy. I have done my reading, now. The secret, physiologically, has something to do fewer connections between the right and left halves of the brain than girls have. So, in theory, boys are not nervier. Their brains just haven't bounced the message back and forth enough to know what they are doing is silly, socially awkward or even dangerous. And, in the evolutionary scheme of things, there is good reason to not think everything through completely when in spear-throwing distance of a three-ton mastodon. Really, you just need to throw the spear and not think too hard and long on those six-foot-long tusks or if your loin cloth makes your butt look big.
Today, in practice, in Los Angeles, when several of these 10-and-11-year-old boy creatures are invited to a birthday celebration, it can mean riding around in a stretch Hummer limo to wherever they want to go (like I said: Los Angeles). After rollin' like rock stars, drinking cola from champagne flutes and bustin' out with the dance moves, where do boyz wanna go? They want to go to the park to climb rocks and feed the ducks.

How long will this last? This equal fascination with limousines and ducks? I suppose soon enough girls will surpass ducks on the list of interests. And I kind of hope "been there, done that" applies to stretch limousines sooner rather than later.

I still don't know where boys get the nerve. But I'm glad they have it.
Posted by Fledgling at 10:09 AM

I too am a fan of boys. I've always had more guy friends than girl friends. I'm the biggest fan of the little 5 year old one that lives in my house.

I believe you like boys. Every time I was pregnant I thought: It's a boy.... three girls later I know I never will be a boys mum. So I look after the little boys my mini is taking home now....

what a great day!

what fabulous photos Nancy! WOW!!! I too am a fan of the boys - especially smelly, energetic 6 year olds who desperately wants to do a fakey fakey 180 (?)but will still throw on a dress to model for mom.... and 11 year olds with heads of hair who want to curl up in the corner of the couch and get lost in a book all day....the world would not be the same without them