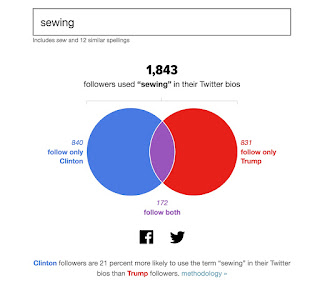 Those forum members from conservative backgrounds, who would otherwise eagerly answer a question on different hand stitches or cleaning a  serger, kept a polite distance from this man. Nothing uncivil, nothing disrespectful, nothing disgracious and nothing indelicate. Just distance. Just didn’t reply to his posts. Didn’t comment on his sewing accomplishments.

He was over here. They were over there. Ne’er the twain would meet or some such.

As it goes with sewing forums, especially ones about sewing for children, members come to know one another and get a glimpse into the lives of others. Members often share things more than discount codes for Fabric.com. Members watch their children grow and share in their joys and milestones. And they share other things, as well. Such as when this particular man shared that he was diagnosed with cancer.

And just like that, those ladies, the ones who held a very different belief system and very likely held deep and damning (in the truest sense of the word) convictions about this man’s sexual orientation, set into action. They organized prayer circles. They asked for the son’s measurements and went to their sewing machines. They took out jars of homemade jam from their pantries and put together care packages. They gave recipe tips from when they were going through their own bouts of nausea with chemo.

So the whole while, as this one set of members were keeping that polite distance, they were also curious, were also taking a look into this man’s life. And they must have at that point just seen the man, that he was diagnosed with cancer and that he had a young son. My eyes are tearing up as I write those words.

Nice blog, the article you have shared is good.This article is very useful. My friend suggests me to use this blog. Really appreciate the same kindly keep writing the same.
clipping path service


I think this is a really great blog post. Really thank you! Fantastic.

First you visit Carrom Pool Mod APK site once. Hello, this article is very good for you, I have liked everything mentioned in this article and I will definitely share it in my friend circle... Thank you!