Today, let's finish the MIKA pockets. And talk a little bit about the designing.
Ugh.
"Being the spokesman for my generation is absolutely the worst job I've ever had"

-Billy Bragg
Two Rules of Design, Because I Say So: 1. Fabrics which do not match, once they are sewn together, match. 2. Fabrics which match before being sewn together, do not look so great once sewn together. Go for the Nonmatch. It makes for a more interesting composition. It's the difference between two scoops of vanilla and one scoop of pistachio nougat and one scoop of Fancy Nancy. Take inspiration anywhere, like from these dolls. But today, take inspiration from Billy Bragg. Because I say so. Because I am Fancy Nancy and that is Coffee and Cream with Banana and Caramel.

Denim and camo I'd qualify as neutral in color, because they show up so often in clothing, that you don't really recognize the actual color. Denim and camo, in my opinion, qualify as design allusions ("rugged", "adventure", "military", "cowboy", etc.), but not really as colors. So I'm not going to count these as a colors. In the color composition, that just leaves my trims, which are dominated by primary red. The allusions in all these trims (gingham, hedge hogs, edelweiss) is something Alpine, something folkloric. Which contrasts with the adventure/military, to make the garment more feminine. To contrast the color (add "pop"), I'm choosing this bright tertiary lemony green topstitching thread. 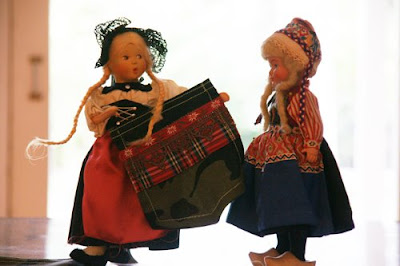 Ugh. Enough of my genius. Back to work. 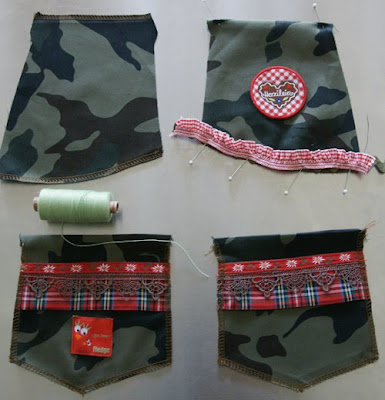 I've finished all the edges of the rear pockets with a four-thread over-edge stitch, except the bit at the top side, which will be folded over double. If you do not have a serger (or if you have three sergers, like me, of which none works properly), an overcast zig zag stitch will do you well, as well.

On the front pockets, I've finished the top edge and the bottom edge with the four-thread over-edge stitch. In a next step, I've pressed with a steam iron the top edge seam allowance over twice and topstitched twice. I'm liking this topstitching thread. I, like you, am still unsure about all the gingham and so forth. It's a journey, not a destination.
Then I press under the seam allowances of the sides and bottom of the rear pockets and topstitch at the width of the pressure foot. 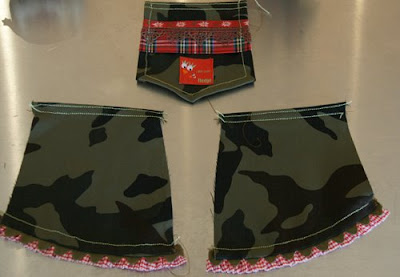 I then fold over the seam allowance on the front pockets twice, press and topstitch two stitching lines. I've added some trim to the bottom of the front pocket, turned, pressed and topstitched from the front at the width of the pressure foot.
Your turn. I sees you at de chorus! Go then, lights up! YEAH!

I just realized, Mellissa is moving today. Let's give her a little break on the MIKA sew-along.
Posted by Fledgling at 9:21 AM

love the bright green thread for *pop*. Hope I didn't sound too forward in my last comment...my girls have gotten to know that there is always a pop and your designs are so bright and cheerful I just thought of that aspect when commenting.
Love your fledge patch too! That's a pop. :o)
Can't wait to see the finished product.

I have just finished the Imogene dress and I really like it but it feels like it is missing something...take a look?
http://www.etsy.com/view_listing.php?listing_id=15047267

I was going for a revamped school uniform dress but not too much going on. I have had many looks at it but no-one wants to buy...wondering if I need to do more to it.
Thanks if you get a chance...I know you are in the middle of big stuff. :o)
Lori

Thanks Nancy...I love how things are going on your sew-a-long. I'm getting started today and hopefully, in the next few days I can have something posted and get caught up!